How to Cope with Mild BPH Symptoms

Benign prostatic hyperplasia (BPH) is a condition developed by nearly all men as they age. In fact, nearly the totality of men over 90 are affected by some degree of an enlarged prostate. This is because prostate enlargement is a part of the natural aging process in men. However, although BPH is the most common prostate related problem, it does not mean that all men will require medical treatment. In most cases, symptoms are mild to moderate and do not require medical treatment.

If you are experiencing mild BPH symptoms you do not need to “live with it” until the symptoms worsen. As a matter of fact, a few changes in your lifestyle will reduce your BPH symptoms and may even slow down the prostate enlargement process.

Here are 5 things you can do to keep yourself (and your prostate) happy.

1- Talk to Your Doctor

Even if you are experiencing very mild urinary symptoms, it is important for you to seek medical attention. Your doctor will evaluate if your urinary symptoms are in fact caused by benign prostatic hyperplasia and determine the severity of your BPH symptoms.

If you do not require medical treatment, your doctor will be able to help you find ways to reduce your symptoms. Your medical practitioner will also review your medical history and the prescription and over-the-counter medications you are taking as some drugs are known to worsen BPH symptoms.

Stress, nervousness and tension will worsen your symptoms and increase your need to urinate, which, in turn, will increase your levels of stress and anxiety. Instead, try to relax to break this cycle. Reduce stress through breathing exercises and other stress reduction techniques that will help you cope with the problem instead of worrying about it.

Staying active is an important part of keeping your BPH symptoms under control. Physical activity will not only help you reduce stress, but it will also improve your urinary symptoms. Studies show that lack of physical movement can make you retain urine. So, especially if you have a sedentary job, get moving. Walking, jogging or swimming are great ways to reduce your urinary symptoms.

4- Watch What You Drink

One of the most bothersome symptoms of BPH is frequent urination. For this reason, many men make the mistake of drinking less water. That is a big mistake. Concentrated urine irritates the bladder, giving you the sensation that you constantly have to void urine that isn’t there. Instead, try drinking a healthy amount of water, but drink it in small amounts, several times a day. Gulping large amounts of fluids will put too much pressure on your bladder, which is when drinking water can worsen your symptoms.

If you are suffering from nocturia (waking up several times during the night to urinate), it might be a good idea to reduce your fluid intake in the evening.

Also, some drinks will worsen your BPH symptoms. Staying clear of alcohol and caffeine is a good idea if you have BPH, as they cause the body to produce more urine.

Avoiding to put too much pressure on your bladder is another way to reduce your BPH symptoms. Simple actions can help you avoid irritating your bladder and pelvic muscles to improve your urinary symptoms: 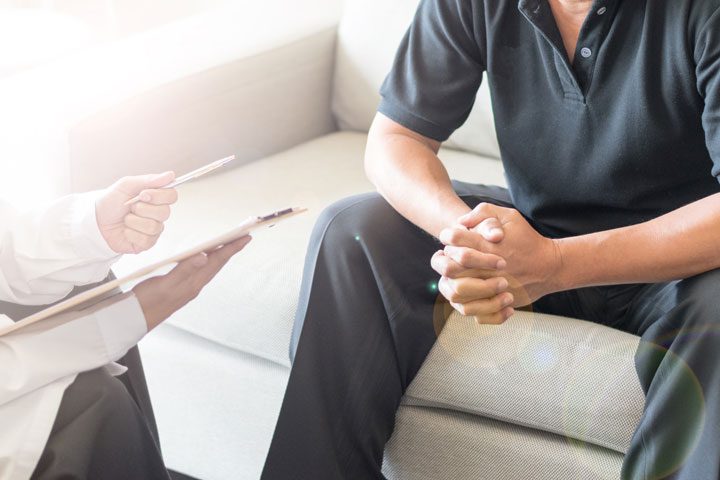 If your BPH symptoms worsen or begin to affect your daily life, it is important to meet with a medical expert who will be able to help you determine the best medical treatment for you. Effective minimally invasive treatments are available to help significantly reduce urinary symptoms caused by benign prostatic hyperplasia.

If you are feeling overwhelmed by your BPH symptoms, don’t wait.

The International Prostate Symptom Score (IPSS) questionnaire below was developed to measure the severity of your BPH symptoms. Take the quick quiz below we will immediately email your results and follow-up steps.